During the last ice age, a lobe of ice at least a half-mile high blocked the Clark Fork River near the present-day Idaho and Montana border, creating an enormous natural reservoir - glacial lake Missoula. This ice dam failed - over and over - sending inconceivable volumes of water and ice rampaging across the land. The largest floods were equal to 10 times the modern flow of all the rivers of the world combined.

Each thundering torrent of water, ice, and debris raced across the Rathdrum Prairie and into eastern Washington, stripping away tons of soil and rock and carving a region known as the Channeled Scabland.

All the water released from glacial Lake Missoula had to pass through Wallula Gap, where the Columbia River turns sharply west towards the Pacific. As flood waters backed up behind this narrow break in the Horse Heaven Hills, they filled up vast areas of the Walla Walla, Pasco, and Yakima valleys creating a short-lived lake, Lake Lewis, which reached depths of more than 800 feet deep.

Learn more about the Ice Age floods in Washington, via an Esri Story Map, developed by the Washington State Department of Natural Resources

Whether you are planning a visit to eastern Washington or the Columbia River Gorge, Washington State Parks offers multiple opportunities to explore the Ice Age Floods National Geologic Trail.

The Dry Falls Visitor Center, located in the heart of the Grand Coulee, is one of the most impressive Ice Age floods features to be found. The visitor center features indoor and outdoor exhibits focused on the ice age floods story and offers breathtaking views of Dry Falls.

Or, visit any one of the state park flood sites to see the landscape carved out by the ice age floods and start your own adventure. 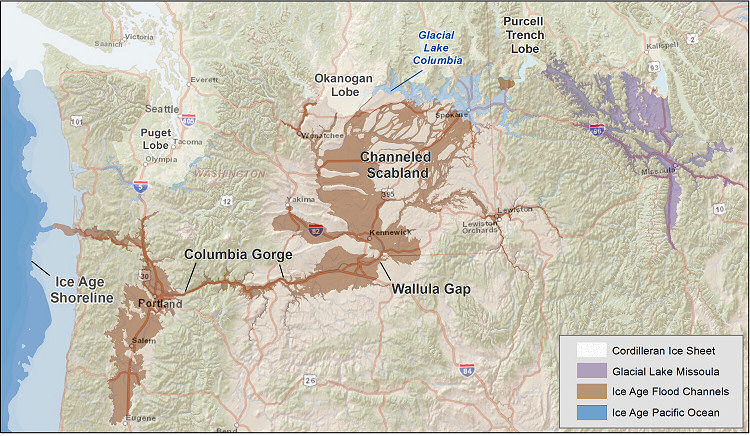