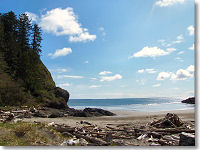 As Clark and his party reached the narrow part of the cape, Clark wrote, "I crossed the neck of land low and half of a mile wide to the main ocean."

They reached the open ocean at today's Waikiki Beach, near the main entrance to the park. After climbing to the top of a "high open hill projecting into the ocean" (today's McKenzie Head), they camped for the night on the beach.

With obvious contentment, Clark wrote, "Men appear much satisfied with their trip beholding with astonishment the high waves dashing against the rocks and this immense ocean."

In the morning, the party hiked "through rugged country of high hills and steep hollers" to explore more of the landscape now in the state park, and then to the long "sandy coast" that stretched to the north. During Clark's journey to Cape Disappointment, he realized that the exposed north shore would not serve for a winter encampment. 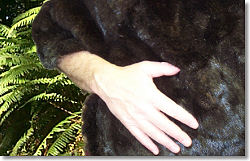 After returning to Station Camp, trade was lively between the Corps of Discovery and the Chinook Indians.

"One of the Indians had on a robe made of two sea otter skins" noted Clark, "the fur of them were more beautiful than any fur I had ever seen." Desiring this robe, the captains traded away Sacagawea's belt with blue beads on it.

Cape Disappointment State Park is a large park that offers many amenities. If you are interested in history, the newly renovated Lewis and Clark Interpretive Center should be first on your list of stops.