1805: to the Pacific - down the Columbia River, always seeking food

On Oct. 29, 1805, the members of the Lewis and Clark Expedition stopped at the site of Doug's Beach State Park.

"Came too on the starboard side at a village of seven houses built in the same form and materials of those above. Here we found the chief we had seen at the long narrows," wrote Clark. "We entered his lodge and he gave us to eat, pounded fish, bread made of roots, Filberts nuts, and the berries of Sackecomme. We gave to each woman of the lodge a brace of ribbon of which they were much pleased… we call this the friendly village."

On their return trip, as the members of the corps approached the site of Friendly Village, they began the long process of trading for horses from the local American Indians. Lewis and Clark knew they could not portage their canoes upstream through the narrows and falls. They needed horses to continue their trip, and the local inhabitants had horses - but trading for them was not easy. When they arrived at the Friendly Village, they had not yet been successful in obtaining any horses. At the village they tried again, "with no better success," lamented Lewis. 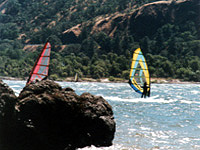 Today, there is still much activity at this site. On windy days, hundreds of sailboarders gather to catch some wind and test their skills against world-famous Columbia River waves. Lewis and Clark noticed wind, too. A few miles downstream of this site Clark noted, "the wind rose and raised the waves to such a height that I could not proceed any further."