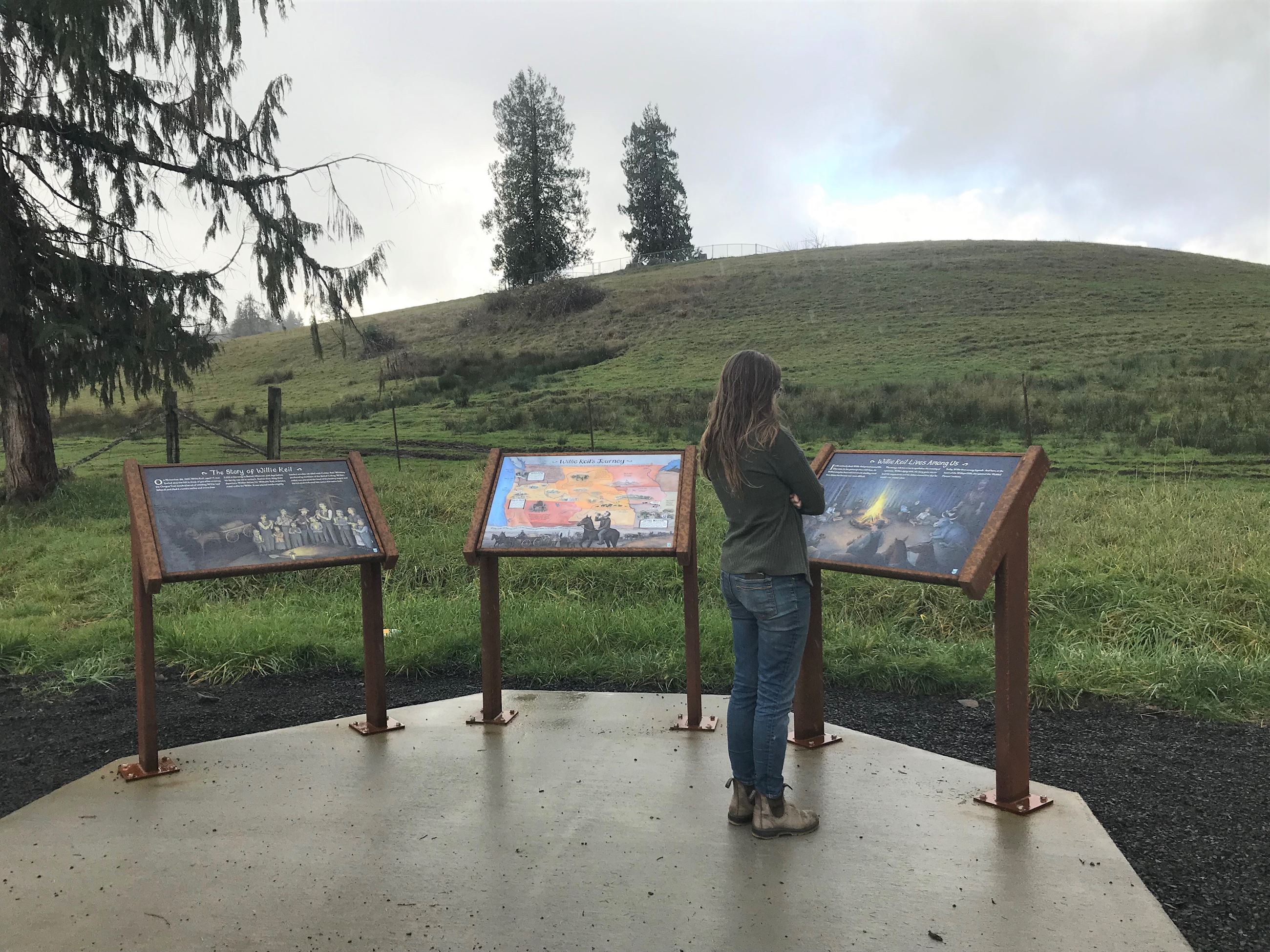 Willie Keil’s Grave sits just off State Highway 6, around 5 miles east of Raymond, in a small, private cemetery. Visitors can view the gravesite from the State Parks highway pullout 100 yards away. Many cyclists riding on the Willapa Hills State Park Trail take a small detour east of Raymond (crossing the highway) to stop at the site. Motorists pull off the highway to pay their respects.

About Willie Kiel and his family

Born in 1836, Willie Keil was scheduled to leave Bethel, Missouri in 1855 on the Oregon Trail. His father, Dr. Wilhelm Keil, had founded the town of Bethel as the setting for his religious colony, whose members were known as the Bethelites.

Less than a week before their departure, 19-year-old Willie died suddenly.

A whiskey barrel for a coffin

The colony created a unique handmade coffin for him: a wooden barrel lined with lead. Willie was placed inside, and the coffin was filled with 100-proof Golden Rule whiskey, distilled by the Bethel Colony. The coffin was placed in the party’s lead wagon, and they set off for the Pacific Northwest.

The Bethelite wagon train traveled for six months, during which Willie’s body remained preserved in whiskey.

Over that half year, the wagon train passed by or touched down in places like Fort Laramie, the Tetons and The Dalles. Along the way, they met the Native peoples of the Great Plains, who, according to Wilhelm’s journals, treated the group with kindness and respect. The pioneers hunted buffalo and bemoaned the summer heat as they passed between Fort Hall and Fort Boise.

Upon arriving in the Willapa Valley, Dr. Keil found the climate too cold and damp and the evergreen forests too rugged to convert to farmland. He soon moved the colony south and founded the town of Aurora in Oregon’s Willamette Valley. A few members stayed behind and became some of the region’s first European-American settlers.

Among those who stayed was Willie. After the long journey, his body was laid to rest on a hill near the present-day community of Menlo on Nov. 26, 1855.

Over the years Willie Keil became a folk hero — the “Pickled Pioneer” — and his story became legend. Many versions suggest that crossing the Oregon Trail was Willie’s dying wish, and his unique journey west has become a symbol of a solemn promise kept by a father to his son.

In 1959, the Buell family donated a 0.34-acre parcel of land to the state. The Buells were descendants of original Bethel colony members who stayed in the area when Dr. Keil moved his followers to Aurora.

Located along Highway 6, the piece of land had a view of Willie’s gravesite. The donation was part of the Century 21 State Beautification Program, an effort among Washington towns to improve parks and public spaces in advance of the Century 21 Exposition in 1962 (also known as the Seattle World’s Fair).

A wooden marker recounting the story of Willie Keil was added soon after. In 2020, Washington State Parks replaced the aging marker with new interpretive panels.

The original wooden marker is now on display at the Northwest Carriage Museum, in Raymond.